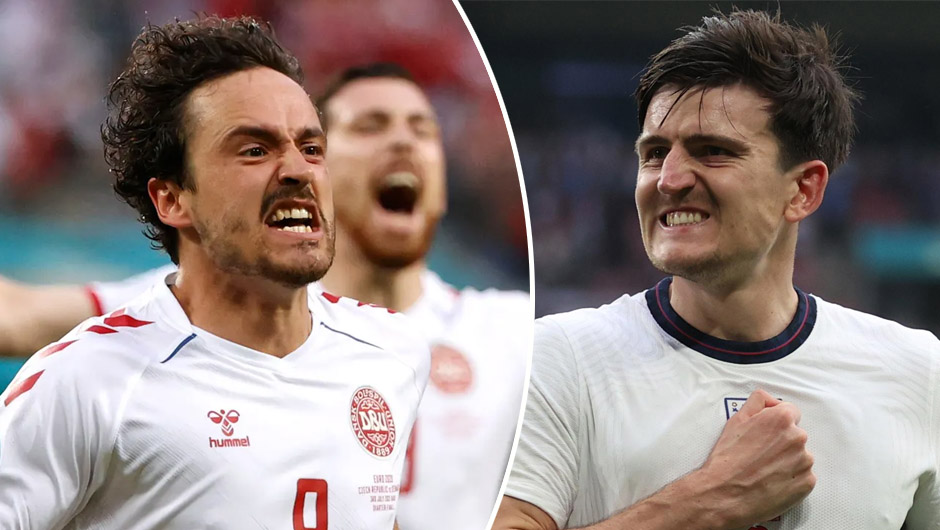 England and Denmark will face off in the Euro 2020 semi-final at Wembley on Wednesday. The kick-off is at 21:00 CEST.

England could become the first team in history to reach the European Championship final without conceding in each of their six preceding games at the tournament as the Three Lions won their group by defeating Croatia and the Czech Republic 1-0 each while drawing Scotland 0-0 in between. Gareth Southgate's men went on to pass their toughest test at this summer's Euro against Germany (2-0) in the last-16 round before thrashing Ukraine 4-0 in the quarter-final on Saturday.

Denmark, for their part, have reached the semi-final of the tournament for the first time since becoming the continental champions in 1992. What's impressive, Kasper Hjulmand's side have managed to do so after opening their group stage campaign with consecutive defeats at the hands of Finland and Belgium. The former one was mainly cause by Christian Eriksen's collapse on the pitch of Parken Stadium. The Danes, however, went on to book their spot in the last-16 round by destroying Russia 4-1. It was Wales who had fallen victims of Hjulmand's in-form crop in the first knock-out round (4-0) while the Czechs were defeated 2-1 in the quarter-final.

Aside from Eriksen, who could even retire from football for good, there are no confirmed absentees in either team.

In fact, Southgate has already made history with England as he has led the Three Lions to back-to-back semi-finals at a major tournament having reached the same stage of the 2018 World Cup. As England's campaign in Russia was stopped by Croatia, they certainly wouldn't underestimate the forthcoming opponents who are placed as clear underdogs ahead of the match. The Danes, meanwhile, has nothing to lose on Wednesday and while we wouldn't be so sure about their chances to make it the final, let's say that Hjulmand's men are more than capable of putting an end of England's seven-game clean sheet run across all competitions at Wembley.