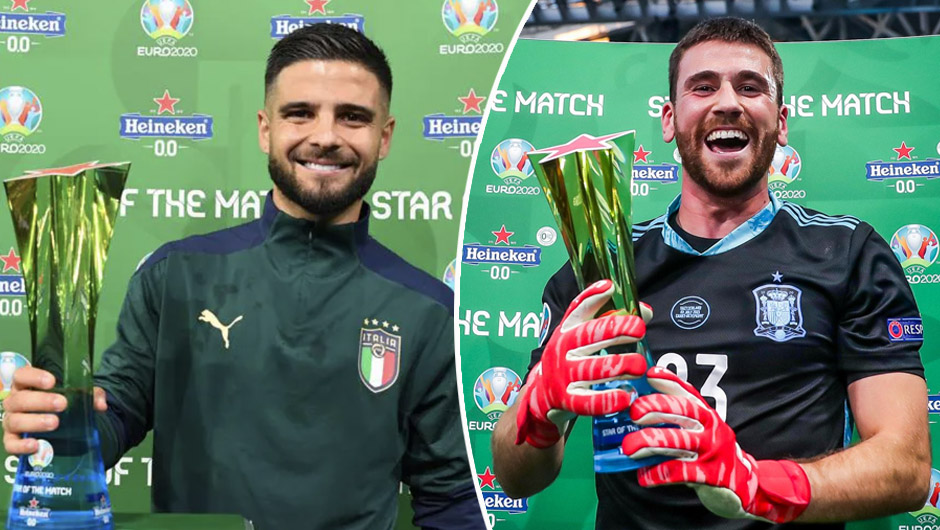 Italy and Spain will go head-to-head in the Euro 2020 semi-final at Wembley on Tuesday. The kick-off is at 21:00 CEST.

After winning each ot their Group A games against Turkey, Switzerland and Wales without conceding, Italy were taken to extra time by Austria (0-0) in the last-16 round. Federico Chiesa and Matteo Pessina, however, were the ones who had sent the Azzurri into the quarter-final on that night in London despite Sasa Kalajdzic's late strike (2-1). Roberto Mancini's men went on to defeat one of the tournament's favourites Belgium in the last-8 round thanks to goals from Nicolo Barella and Lorenzo Insigne.

Spain, for their part, only booked their spot in the last-16 round after the final game in Group E after drawing Sweden (0-0) and Poland (1-1) in the opening two encounters. Still, Luis Enrique managed a 5-0 victory over Slovakia and thus made it to the knock-out stage where they met the 2018 World Cup runners-up Croatia last Monday. La Roja were forced to play additional 30 minutes against the Croats after a 3-3 draw in normal time but Alvaro Morata and Mikel Oyarzabal stepped up to save their national team in Copenhagen with their extra-time goals (5-3). Then, the Spaniards had to decide a winner of their quarter-final clash with Switzerland in the penalty shoot-out (0-0). Unai Simon was the hero of that game as he saved the attempts of both Fabian Schar and Manuel Akanji before Ruben Vargas sent the ball well over the bar.

Leonardo Spinazzola will not feature for Italy at this summer's European Championship again as he reptured his Achilles tendon in the Belgium victory and is now set for a lengthy spell on the sidelines. Alessandro Florenzi, meanwhile, has fully recovered from a calf problem and could be given his first start at the tournament on Tuesday. Pablo Sarabia, in turn, is the only doubt in Spain's squad after picking up a muscular injury against the Swiss side.

It'll be the teams' fifth head-to-head meeting after La Roja's 4-0 thrashing of their fellow Mediterraneans in the Euro 2012 final in Kyiv. Spain have beaten Italy twice while losing and drawing once in each of the remaining two matches since then but one can hardly name Enrique's crop as the hot favourites to claim a victory this time around. The thing is that the Azzurri are now on a record-breaking 32-match unbeaten run, having won 13 previous encounters on the bounce. Spain, for their part, are visibly lacking a top-class striker at the tournament - someone Morata continues to prove himself not to be in the past few games. Thus, we wouldn't be surprised if the Azzurri gain revenge on La Roja for that painful loss nine years ago in this one.