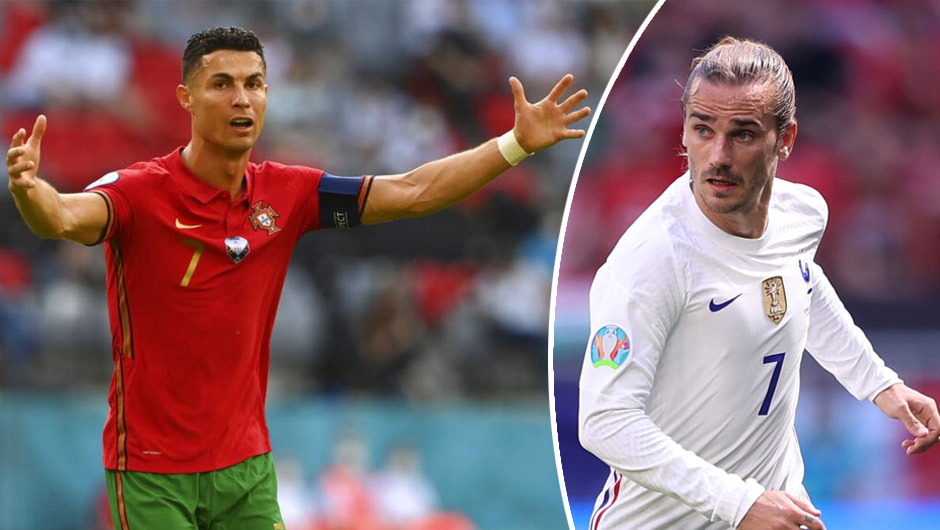 Portugal and France will lock horns in the matchday 3 of Euro 2020 Group F at the Ferenc Puskas Stadium on Wednesday. The kick-off is at 21:00 CEST.

Portugal proved their status of the reigning European Championship winners by defeating Hungary 3-0 in their opening day clash thanks to Cristiano Ronaldo's brace that followed Raphael Guerreiro's opener in Budapest last week. Fernando Santos's men, however, were brought down to earth by Germany who destroyed the Portuguese side 4-2 in Munich over the weekend.

The reigning World Cup champions France, in turn, kicked off their Euro campaign by a narrow win against the Germans in Munich but were held to a 1-1 draw by the Hungarians on Saturday. Despite dropping points in Budapest, Didier Deschamps' crop are coming into this encounter as the Group F leaders with four points.

Joao Felix and Nuno Mendes have been ruled out for the 'hosts' through injury while France's Ousmane Dembele has been withdrawn from the squad after suffering a serious knee injury in the Hungary draw.

Given Portugal's awful performance agains Germany on Saturday, it's hard to envisage France taking anything but a confident victory in this one. What's more, Les Bleus will certainly be motivated to gain revenge on Santos's side for a 1-0 loss in the 2016 European Championship final in Paris - something that could potentially cost Portugal the last-16 qualification. Thus, we do expect the likes of Kylian Mbappe, Karim Benzema and Antoine Griezmann to make the difference at the Ferenc Puskas Stadium this time around.