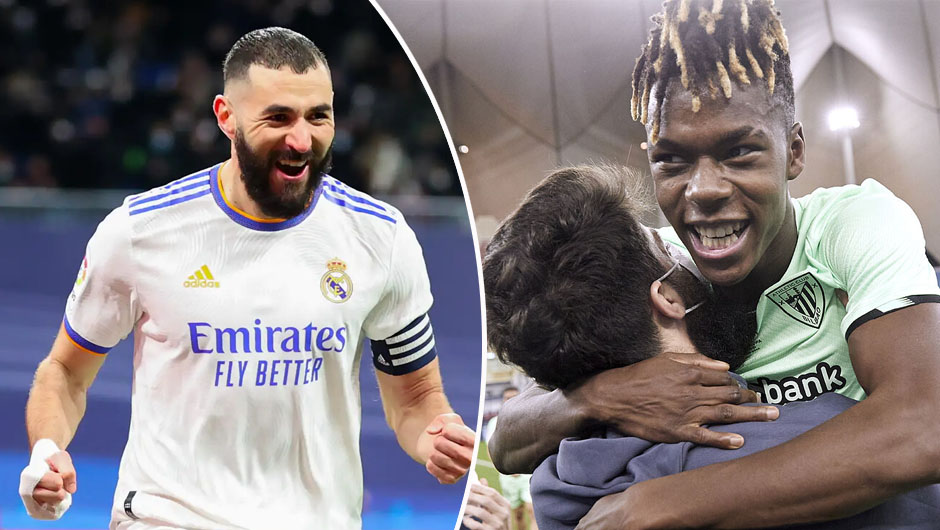 Real Madrid and Athletic Bilbao will go head-to-head in the Spanish Super Cup final at the King Fahd International Stadium in Saudi Arabia on Sunday. The kick-off is at 20:30 CEST.

Arguably very few expected Barcelona to cause major problems to Real Madrid in the competition's semi-final but Carlo Ancelotti's men indeed had to go to extra-time to beat their bitter rivals on Wednesday. It was 98th-minute goal from Fede Valverde which secured a 3-2 victory for the Blancos who will now be eager to claim their first piece of silverware in 2022 on the weekend.

Athletic, for their part, managed a 2-1 victory over Atletico Madrid in their semi-final on Thursday despite being 1-0 down in the 70th minute of the game. First, Yeray Alvarez cancelled Joao Felix's opener in the 77th minute before Nico Williams scored the winner just four minutes later to help Marcelino's side reach their second straight Spanish Super Cup final.

While David Alaba, Mariano Diaz and Gareth Bale are all unavailable for Madrid through injury, Dani Carvajal has been rulled out of the final too with a positive Covid-19 test. Unai Nunez, Unai Vencedor and Asier Villalibre, in turn, will play no part for the Basques on Sunday as they remain on the sidelines.

Even though Madrid are placed as the hot favourites to claim the trophy this time around, let's not forget that it were Athletic who defeated Barcelona with Lionel Messi in the squad in last year's final. However, Real have already beaten the Bilbao outfit twice in La Liga this season so far with the latest encounter taking place in December when Karim Benzema's brace secured all three points for Ancelotti's crop despite Oihan Sancet's goal at San Mames. Hence, let's say that you should expect goals at both ends in this encounter as well as neither side are going to give up on the trophy until the very last minute of the game.